So while I was on vacation some entity (and I use the term loosely) created a fake facebook account with my name and photo.  Some friends reported it, and facebook emailed me:

"We reviewed the profile your friend reported and found that it isn't pretending to be you and doesn't go against our Community Standards."

Now, it was my photo with a frame around it.  And there isn't more than one Thomas Cornwell who looks exactly like me, in my car, wearing my glasses and the UNC themed cloth mask my wife made for me.  In short, a drunk, one-eyed, chimpanzee could tell it was a fake account.

I'm not going to jump through hoops so I can continue to generate content for an organization that's either incompetent or just doesn't give a damn.

So when I feel the need to share/vent with the internet people of the world, I'll do it from here.  Fewer folks will see it, but that's probably a good thing. 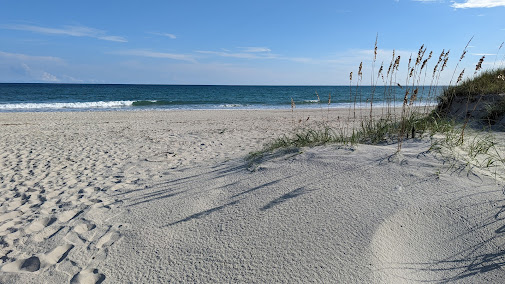 I remembered I have a blog.
Posted by Tom at 6:22 PM No comments:

I want The Wave 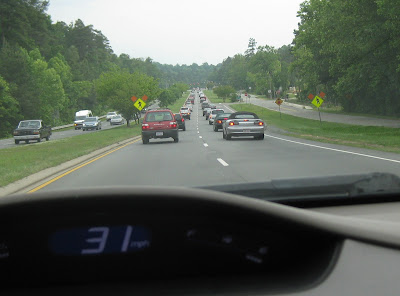 I try to be a nice guy.  Really I do.  Ask anyone who knows me, and they'll tell you that yes, I am a nice guy.  I hold open doors for people.  I tip well.  I don't litter.  I'm dumb to kind animals.  I even go so far as to let people in ahead of me if traffic is heavy and they're obviously in the wrong lane.

I realize that often people take advantage of my consideration, especially jackwagons that zoom ahead and merge at the last second instead of getting in line like civilized folks.  Still, for every ten or twelve jerks who do that, there is one poor soul who is genuinely lost, or timid, or who just made a mistake and could use a little courtesy.

For these lost lambs I'll toot my horn, flash my lights, or otherwise wave them in ahead of me.  Maybe I've made someone's day a little better.  Maybe I've done unto others as I'd have them do unto me.  I don't know.

What I do know is this:  I want The Wave. The Wave can take many forms.  A hand out the window.  A smile.  A nod. A glance in the rear view mirror and a hand raised briefly in recognition that someone has done something nice for you.  It's not that hard to do.

Since I started paying attention who Waves and who doesn't, I've been Waved by young and old, men and women, teenagers, older folks, cops, thugs, pizza guys, people driving SUVs, hybrids, motorcycles, scooters, bicycles, buses, tractor trailer trucks, hoopties, jacked up El Caminos, Mercedes, a Bently once, pretty much the whole automotive spectrum across this great land of ours.

BMW 500 and up?  No problem.  They rank way above average on the Wave scale.  2002's?  Beautiful people all.  Even Z3 and Z4 roadsters.  But there's something about a BMW 300 series driver that refuses to realize there are other people on the road.  I swear, you have to fail a personality test before they'll sell you one those cars.  A few weeks ago I was cut off by three different BMW 300's in a span of ten minutes on my way to work.  You'd think if someone was going to shell out a few grand more for the leather package and moon roof they'd toss in an extra twenty bucks for a pair of turn signals.  Maybe there's a recall I haven't heard about, but I've never seen a turn signal in action on a BMW 300.

So, if you find yourself unexpectedly in the Left Turn Only lane, and you glance desperately over your shoulder, hoping against hope that someone will bail you out of the mess you find yourself in, take heart.  I'm not the only one who's willing to take a little longer to get where I'm going if it means helping a stranger in need.  As long as you're not driving a 300 Beemer.
Posted by Tom at 9:54 PM No comments:

Huge autonomous cyber-tanks have been reported rolling east out of Carrboro.  Chapel Hill has surrendered, and Durham is understandably anxious. 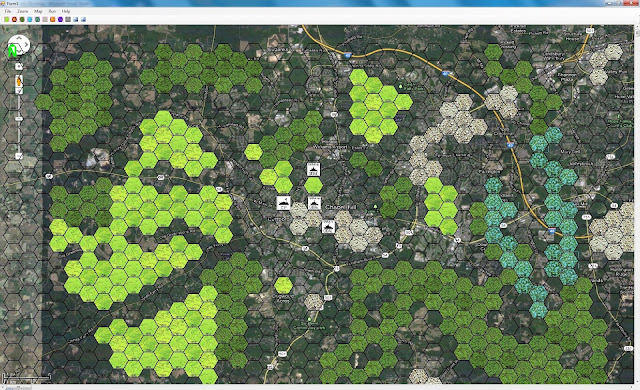 It would be neat if SJG added a suburban terrain type to Ogre.  Though in the context of BCP armor and tac-nukes, most small towns and neighborhoods would be considered clear terrain anyway, but it would make the maps look cooler.  Like if an Ogrethulhu claimed Ipswitch, for instance: 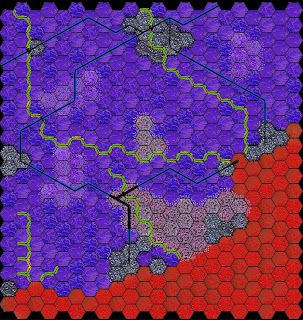 Thanks to the guy on the SJG forums who did the original map of Ipswitch, I just recolored it here.  But there will be an Ogrethulhu tile set for OgreMap2.0, which is very much a work in progress and the source of the top image.

Nobody Younger than Me Knows Squat

When one reaches a certain "temporal seniority", one comes to realize some fundamental truths. That is to say, nobody younger than me knows squat.

Some of the teachers in my daughter's school were born after I graduated high school. How can I entrust my child's education to people who are barely old enough to cross the street alone?

Kids today have no appreciation of history. To whit: A few days ago I purchased a terabyte external hard drive for just over a hundred bucks. 20-plus years ago I installed a 20 megabyte hard drive that cost just over four hundred bucks. Today's drive is roughly two hundred thousand times the capacity per dollar. It's way faster too.

My first modem was 300 baud. It stunk.  So I took it back to Radio Shack and shelled out an extra hundred bucks for the 1200 baud version. And it was fast. Now I've got 0.43Mb/s upstream and 6.42Mb/s downstream, but it doesn't feel as fast.

I was the youngest kid in my family, which meant I had the honor/duty of being the remote control for the TV.  I was the one who got up and changed the channel. Yes, that clicky dial on the side of the 19" (if you were lucky) TV screen. I also knew how to point the rabbit ears so we could watch Wally Gator on Channel 7 out of Roanoke.  That's why cartoons were only 4 or 5 minutes back then.  So kids wouldn't pass out trying to balance on one foot while holding the antenna out one way and sticking one leg out the other.

And keep your internets off my grass.
Posted by Tom at 1:00 PM 1 comment: 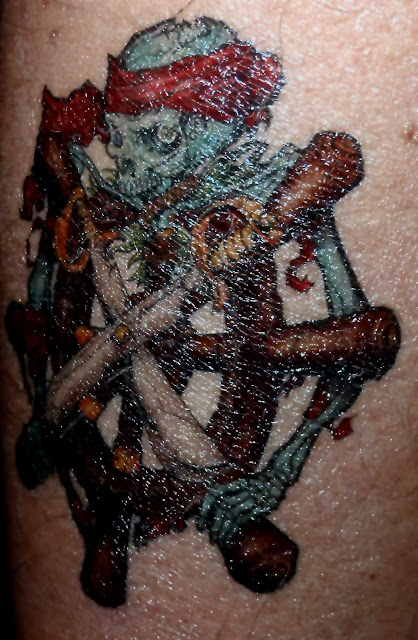 I now sport a Zombie on my arm.  Not only a Zombie, but a Pirate-Zombie.  With a skull.  And an eyeball in the skull so he can see your face melt into helpless terror before he does all sorts of mean Pirate-Zombie things to you.  He's even got a red bandanna because if he had any sweat glands or hair, it would keep them out of his eye. Those might even be ninja swords nailed to the ship's wheel.

"So cool Jungle Beasts howl my name at the rising moon" I reply.

It doesn't photograph very well, though.  I think the awesomeness interferes will the camera's CCD element.

If it was a traditional sub-dermal tattoo it wouldn't be so shiny.  Instead I got a super-dermal tattoo.  Everybody knows super is better than sub.

Plus it'll come off with a little lava soap before my wife comes back to town.  The importance of this cannot be over stressed.
Posted by Tom at 7:51 AM No comments:

If I Ran the Fair 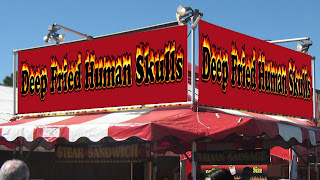 When I was a little tyke, one of my favorite books was Dr. Seuss' "If I Ran the Circus". I always liked the great big lemonade tank and the huge stack of cups. Mr. Sneelock seemed like a really cool guy. Kinda laid back, and a jack of all trades. He's semi-retired, running his store and smoking his pipe, secure in the knowledge that he can still wrestle a Grizzly-Ghastly if called upon.

Flash forward to 2011. One of my favorite things about the state fair is the way the vendor's signs reach out and grab you by the optic nerve. And they won't let go until they've extracted the designated bit of cash. There's something magical about the promise of the most delicious, decadent, deep-fried, and (usually) downright disgusting snacks ever conceived by Western Man.

I've never had deep-fried snickers bars, deep fried Coca-Cola, or a double cheese burger with extra bacon and two Krispy Kreme donuts in place of the bun, but I do enjoy thinking about them.
Posted by Tom at 4:47 PM 1 comment: 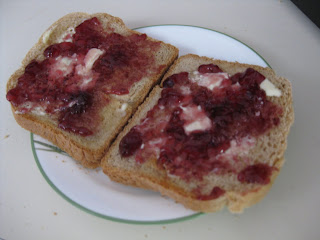 Is it not wonderful to live in a time and place where toast is available 24/7, without regard to color, creed, or regional football affiliation?

You see, back in the middle ages toast was not the fare of the common man (those peasants sure had it crumby), but reserved for the landed gentry, the upper crust if you will*.

Tremendous resources were expended in the production of Toast for themsuch what could afford it. It took a lot of bread to make Toast. Massive Leyden Jars, Lightning Catchers, and the ancient Egyptian Lens of Ra, are but a few of the artifacts of the Master Toaster's craft without which no breakfast museum would be complete.

Toast provides interesting nutrients. In addition to Thrombic Acid and Polysulfamenahydrozine, Toast has been shown to augment one's Powers of Command. This revelation goes a long way toward explaining why Toast was always found among the preserves of the aristocracy.